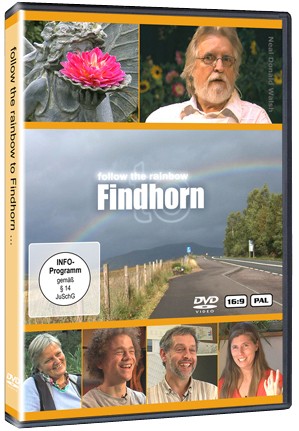 „Follow the rainbow to Findhorn“ is the second movie shot by the filmmaker Markus Werner. The ecovillage in the north of Scotland that has been founded in 1962 by three people who had the goal of leading a spiritual life. It’s called the „Findhorn Ecovillage“. The settlement is one of the biggest communities in Great Britain. Thousands of people from more than 40 countries have been living on this site in the last almost 50 years.

Filmmaker Werner tells the story of eight community members. He approaches their lifes in a patchwork like manner of weaving their interviews into the chronic of the founders. Eileen Caddy, one of the founders, had started to trust a „small, little voice within“ – as she called it – and followed this guidance through the rest of her life. The same voice told her, that the caravan park where she and her husband Peter landed would be a point of pilgrimage in future.

Without any rational reason the three pioneers were driven simply by their intuition and began to grow vegetables on a piece of land that consisted mainly of sand with just a thin layer of compost. The wonder was perfect as scientists found this experiment to be successful and people harvested amazingly big cabbages. „Peter and Eileen felt drawn towards something“, says Nikki Crook, a young woman living in the community and adds: „this inspired me“.

There might be a connection between this way of being led throughout life
not knowing and the magic of Findhorn people talk about and feel if they
visit the place. It’s a modern form of spirituality that keeps space for values
like trust, openess, love and community. It’s a human resort where the
language of HEART is provided and spoken.

Neale Donald Walsch, author of „conversations with God“ declares that this way of dealing with the world is a unique chance for growth: „We always have to live in the question never in the answer. The moment you have an answer to  anything … the possibility that you are greater than before is over.“ Do we dare to ask anew in every moment?

Werner keeps track on this question thoughout the movie. Is there a hidden treasure for human kind in this remote place of Findhorn? Is there a seed of thinking and learning that enables us to face all the crises and deep impacts of modern world? Can simple human beings who follow their inner wisdom change the world?

Sustainability plays a major role. This includes the cognition that „the way we are working people to death out there in the world is not sustainable“, Michael Mitton points out in one of the conversations in the movie. He was born in Findhorn and won the gold medal as Scotland’s best young thinker of the year in 2007 dealing with the issue of climate change.

The Findhorn Foundation shares the aspirations of many other people who live in similar settlements. Over the years they formed a network of socalled ecovillages all around the globe. They are experimenting in the fields of social and spiritual values appropriate and applicable for modern society. They cocreate - as they call it - with nature and don’t reject modern technology.