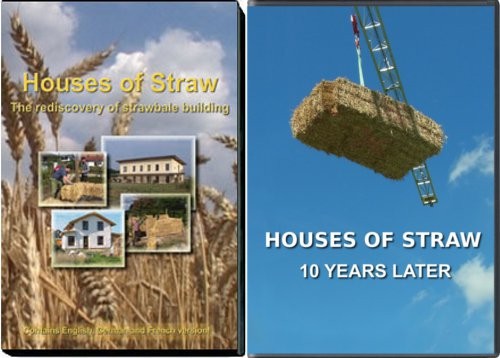 Watch the history of strawbale building over more than 10 years: "Houses of straw" was produced in 2003 in Germany: the first pioneers built their homes with this fascinating building material. Watch the first building sites and an exciting firetest which is still the foundation of German strawbale building regulations.

In "Houses of straw - 10 years later", made in 2014, you can watch what happened to these houses 10 years later. And: most recent development of strawbale building: are shown, even a five storey-office building with strawbales in the walls.


HISTORY
Could it be that the house of the future was invented a century ago?In the 1890s, pioneers of the sandhills of Nebraska found themselves building a new life on a treeless prairie, and from necessity began building their homes from bales of straw. Today modern - day pioneers are choosing straw-bale construction for its many advantages. There are now bale structures in nearly all of the 50 states of the USA and in many other coutries as well. Building with straw bales is probably the only building technique developed originally in the United States and then coming to Europe.

ADVANTAGES OF BUILDING WITH STRAW
Straw is an annually renewable crop, available wherever grain crops are grown. It is indeed a waste product, much of which is currently burnt in the fields. The thick walls offer superior insulation value, averaging R-48 for an 18" wall. With a natural plaster, straw bale walls „breathe," and together with the sound absorbing qualities, provide a quiet, healthy interior environment. Straw bales can also be combined to great effect with other natural building systems.

COST
Construction costs can be reduced heavily: they are cheap to buy and easy to work with. Stacked like huge bricks, straw-bale wall systems can be erected quickly without much building experience. In a wall-raising party, it is common for all the straw bale walls in a modest-size structure to be erected in a single day.

HOW TO BUILD WITH STRAWBALES
We followed three house projects through ifferent stages of building. Strawbale arcitect Dirk Scharmer, who founded the first strawbale association in Germany, explains his latest strawbale construction in different stages. In Bavaria this 400 square metre home was built out of strawbales. In the film you can see a little tour through the finished home - quite a luxurious strawbale palace...

FIRE TEST
The German strawbale association gives information about the new way of building, and organises testing of strawbale for construction. In Juli 2003 we filmed a fire test which shows: Strawbale walls don´t burn...A strawbale wall, plastered with clay, resisted a 1000 degrees Celsius temperature for 90 minutes without any trouble!

"A great contribution to the change of values that´s so much called for"
Sebastian David, Sound Designer

"Without having seen this film, I never thought you can build modern, efficient and beautiful homes with straw!"
Ute Knab, viewer at the premiere

Strawbales have become a serious alternative in ecological building. They are healthy, and save our climate in many ways: straw stores carbon dioxide, it is extremely energy-low in production, and it has very good insulation values.

The film is a beautiful, one hour journey through the issue of building with bales. Exciting, insightful and inspiring.

HAUS SCHIER, 10 YEARS OLD
In Lower Saxony, we visit the house of the Schier family. The film team had filmed the building of the house 10 years ago. How are they doing in their house today? Owner builder Susanne Schier tells us about her allergies having disappeared, we hear about initial problems with the lime plaster - and Florian Schier sais: we would build with straw again any time!

POST AND BEAM
We visit a recent building site in Brandenburg. The post and beam technique used here is effective and fast. Architect Friederike Fuchs has adjusted the size of the framework to the size of the strawbales. In a one-week seminar the walls of the complete house get filled with strawbales. The result: a highly insulated, healthy home which is better than the German energy saving regulations by 60 percent!

We drive on to Hesse: here, a one family home is built in prefabrication. Builder Michael Fischer is heading the production of wall elements made of wood and straw, coated with a first layer of lime plaster. Independant of weather conditions, the construction work inside the hall is effective and fast. In a timelapse, we can follow the final erection of the wall elements on the building site.

CERTIFIED BUILDING BALES
The German strawbale association has obtained a national technical approval for building with strawbales. One result of their research is a certified building product called "Building bales", which has a guarantee and product liability. Bales can be certified locally, even on the field!

SWITZERLAND
One of the most famous strawbale and award-winning architects is Werner Schmidt in Switzerland. He builds with jumbo bales only. We visit one of his recent building sites, interview him in his inspiring atelier and he shows us one of his oldest strawbale houses. It´s loadbearing and 10 years old - looks as good as new!

5 STOREYS WITH STRAWBALES
In Northern Germany, we watch the biggest strawbale building being built: the "Centre for sustainable building" has five storeys.
Federal minister of economy, Olaf Lies, congratulates - after all, his ministery supported the project with more than 4 million Euros from the European social fund.

BONUS TRACK 1: Training "Professional Strawbale Builder"
The German strawbale association has developed a training for builders, who want to become professional strawbale builders. We visit the first trainees. Professionals such are invited as guest teachers: Barbara Jones from the UK and Herbert Gruber from Austria show their favourite building methods.

In the Ecovillage Sieben Linden we visit Martin Stengel, who built his first strawbale house 10 years ago. Totally by hand, without machines, they build a 2 storey building of wood, straw and clay. We are especially interested in the clay plaster on the outside of the house: did it survive the weather conditions? Clay plastering on the outside is a risk in rainy regions. The result is surprisingly good.

VOICES ABOUT THE FILM

The best straw-film ever! It has a quiet, concentrated, friendly atmosphere. Being a non-builder, the filmmaker has successfully presented facts and details. The film keeps saying the right things, combined with great pictures.
Dirk Scharmer, German strawbale association

Heidi Snel made a wonderful film! I liked the return to buildings which were built and filmed 10 years ago. But also the choice of recent building projects was done well. I love most that you can SEE how much fun it is to build with straw.
Benedikt Kaesberg, carpenter, Baustroh Incorporated

A film that creates the wish to build like that.
Christiane Degenhardt, Berlin

I am very touched and inspired by this film. It presents the important knowledge in an appealing way.  Both laymen and professionals can use this film well. Very recommendable!
Dorothee Bornath, audience of the Premiere

A superb, inspiring and informative film about the building material straw, and about those great people who believed in it and are proving right now. Without having seen this film, I never thought you can build modern, efficient and beautiful homes with straw!"
Ute Knab, audience of the Premiere

A great contribution to the change of values that´s so much called for
Sebastian David, audience of the Premiere

I was most impressed by the comparison of energy efficiency (which was really well done): building a "normal" house produces carbon dioxide. Building a strawbale wall "eats up" carbon dioxide. Storing the greenhouse gas in the wall saves our climate!
Gabriele Krauskopf, Bad Belzig

Thanks for the bonus material - it´s a lovely addition!
Gabriele Küther-Staudler, audience of the Premiere

We want to build an ecovillage in Southern Germany, and we had planned to only build the dwelling houses with strawbales. In the film I found out that we can also build the non-residential buildings with straw!
Roswitha Kugelmann
Chairwoman of "contact in Augsburg e.V"

Your film enables a beautiful, loving glimpse into the younger history and today´s strawbale building. There is a development, starting from individual ideas into ready to go into production.
Kay Hoffmann, strawbale owner-builder

Great film that shows how much fun it is to build with straw!
Nancy Müller, Bad Belzig