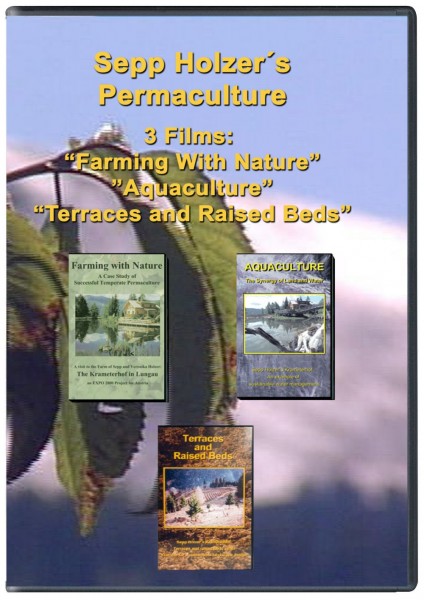 This DVD contains 3 films: FARMING WITH NATURE, AQUACULTURE, TERRASSES AND RAISED BEDS. All films show the Austrian "Agro-Rebel" Sepp Holzer, who simply observes nature and works with it quite successfully. He built one of the biggest functioning permaculture farms in Europe.

Sepp Holzer created an edible landscape on 1500 m above sea level. Between the pinetree monocultures of Austria he built the biggest functioning permaculture landscape of Europe.

A beautiful fishpond system with its own water power station, 9000 fruit trees and many other plants support each other in this biotope. 30 different types of potatoes, many different grains, fruits, vegetables, herbs and wildflowers are growing just about everywhere: in the forest, on extremely steep hills, on rocky soil, on pathways, around ponds, as well as raised beds. All of this he grows without the use of any pesticides, herbicides, fertilizer.

Holzer sais:„I couldn´t understand that still everybody at the agricultural schools told you these chemicals are useful. They drowned us in brochures of the chemical fertilizers with the latest information on how many kilos of which stuff you should get. But if you follow their instructions you only have trouble: your purse is empty, you have a lot of hard work to do, and you´re destroying all this important life in your ground, and your own health with it. Sorry, but I really don´t want to spoil my own land with this poison!"

Instead of using chemicals he simply observes nature and finds out which plants support each other. In autumn he collects many seeds and stores them, and whenever he can, he throws this seed mixture on his ground. There is no square meter of ground with only one type of plant. Diversity is a key word for Holzer, not only on the level of plants but also on the economic level. Holzer has a lot of different sources of income: he sells fruit trees, fruits, grains, vegetables, fish, mushrooms, all guaranteed biological. Further, he sells seeds of many of these plants including very rare ones.

Next to that, Holzer gives advice to farmers who want to change their farms into permaculture places or people who want to build up a permaculture garden. Since three years now he also gives guiding tours over his own ground to interested people, with a growing interest. He also gives seminars on old techniques such as grinding your own grains, making your own bread and butter etc. He also rents out his mountain huts for people who want to spend time in nature as a holiday.   So it looks like Holzer will never be short of ideas, his economic success is an exception in the whole are

Most farmers in Europe are completely dependant on subsidies. The EU supports farmers, especially in disadvantaged regions in order to keep the cultivation of the land alive. The price is high: 54,3 % of the EU expenses (=41 billion ECU) are flowing into agriculture!"