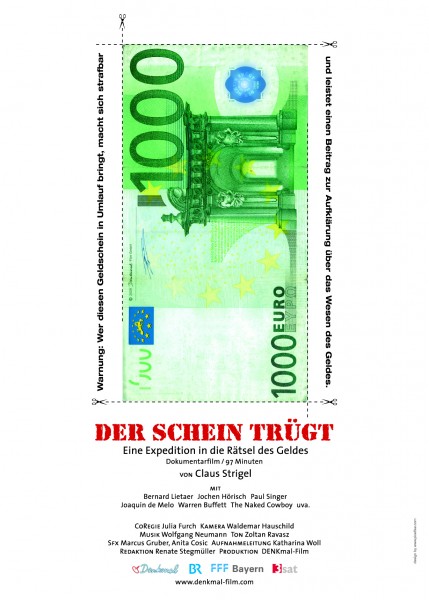 In money all that is solid melts into air. Be it sex, potatoes or weapons, the alchemical substance called money can transform anything into anything else. Humanity’s most brilliant and fatal invention is also the one with the furthest-reaching consequences, says former central bankier and money researcher, Bernard Lietaer. “It turns the mind into a pretzel.”

A magical substance that can mean anything and yet has no value.
It is created from nothing, multiplies exponentially and takes its value from its scarcity. Poverty guarantees its value: If everyone had enough money, it would have no worth.

We are told it's a medium of exchange, but only 2 % of the trillions daily blast around the globe are used for the exchange of goods and services.

The philologist Jochen Hörisch dissects financial terminology and discovers religion. And no wonder. Both are matters of faith.
Given the current crisis, Gerhard Spannbauer is making preparations for the first months following the collapse of the monetary system. His guiding principle is: “Gold and silver are not edible.”

Nonetheless, how-to-become-rich guru Bodo Schäfer is courageously still teaching us how we can make our first million in seven years.

Bernard Lietaer is convinced that the current challenges to humanity cannot be solved within the monopolistic monetary system.His vision is being realised in a favela on the edge of Brazil’s Fortaleza. A second, homemade currency, the palmas, has given this poor quarter a flourishing economy. There are already forty such banks successfully operating in Brazil, and new ones are being founded all the time. Self-printed money doesn’t only function, it often functions better than its counterpart. Thousands of complementary currencies around the world are proving this now.

Paul Singer, National Secretary for Solidary Economy of Brazil puts his finger on it:
We have to regain power over our money.