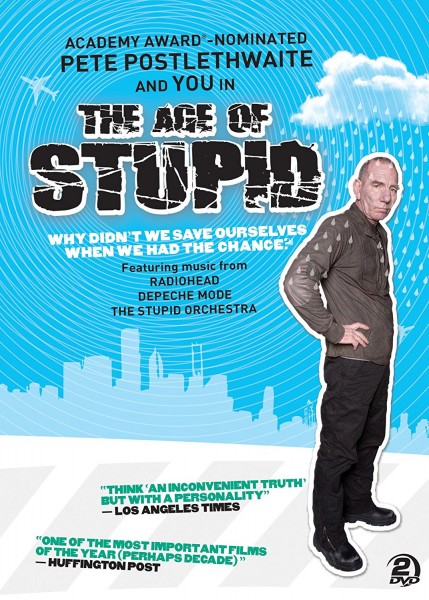 The Age of Stupid is a 2008 film by Director Franny Armstrong (McLibel, Drowned Out) and first-time producer Lizzie Gillett. It is a co-production between Franny's company Spanner Films and Executive Producer John Battsek's (One Day In September) company Passion Pictures.
Oscar-nominated Pete Postlethwaite stars as a man living alone in the devastated future world of 2055, looking at old footage from 2008 and asking: why didn’t we stop climate change when we had the chance?

'The Age Of Stupid’ is the new documentary-drama-animation hybrid from Director Franny Armstrong (McLibel, Drowned Out) and Oscar-winning Producer John Battsek (One Day In September, Live Forever, In the Shadow of the Moon).

Oscar-nominated Pete Postlethwaite (In The Name of the Father, Brassed Off, The Usual Suspects) stars as an old man living in the devastated world of 2055. He watches 'archive' footage from 2008 and asks: Why didn't we stop climate change when we had the chance?

Runaway climate change has ravaged the planet by 2055. Pete plays the founder of The Global Archive, a storage facility located in the (now melted) Arctic, preserving all of humanity's achievements in the hope that the planet might one day be habitable again. Or that intelligent life may arrive and make use of all that we’ve achieved. He pulls together clips of “archive” news and documentary from 1950-2008 to build a message showing what went wrong and why. He focuses on six human stories:

- Alvin DuVernay, is a paleontogolist helping Shell find more oil off the coast of New Orleans. He also rescued more than 100 people after Hurricane Katrina, which, by 2055, is well known as one of the first “major climate change events”.

- Jeh Wadia in Mumbai aims to start-up a new low-cost airline and gets a million Indians flying.

- Layefa Malemi lives in absolute poverty in a small village in Nigeria from which Shell extracts tens of millions of dollars worth of oil every week. She dreams of becoming a doctor, but must fish in the oil-infested waters for four years to raise the funds.

- Jamila Bayyoud, aged 8, is an Iraqi refugee living on the streets of Jordan after her home was destroyed - and father killed - during the US-led invasion of 2003. She’s trying to help her elder brother make it across the border to safety.

- Piers Guy is a windfarm developer from Cornwall fighting the NIMBYs of Middle England.